A solar flare has made it so the beauty of the Northern Lights may possibility be visible from Idaho this weekend. It could also impact communications!

It's rare but happens on occasion; Aurora Borealis being seen as far South as Idaho, and it may happen this weekend. According to CNN, "A large solar flare erupted Thursday and is set to reach Earth Saturday, which could result in a strong geomagnetic storm and cause the aurora borealis, or Northern Lights, to be visible across the US and Europe." They even have maps that indicate where this may be visible, and while it's possible that the lights can be seen from the Treasure Valley, it's much more likely to be seen if you head North. Take a look at this graphic: 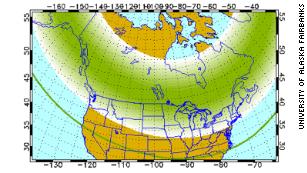 Pretty exciting, really... To think that you could possibly drive out to remote parts of Idaho and see the Northern Lights, Aurora Borealis with your very own eyes. I always think of the 2000 film, 'Frequency', starring Dennis Quaid where he played a father who communicated with his son through a ham radio, through time and the vehicle to make these communications transmissions possible, was Aurora Borealis. So how can it effect communications? Well, according to CNN's article: "This geomagnetic storm could cause voltage irregularities and false alarms on some protection devices, NOAA warns. It also could cause high frequency radio blackouts and loss of radio contact on the sunlit side of the earth." It's such an interesting phenomenon. If you see it, take pictures!

6 Reasons to Road Trip to Yellowstone

This popular show is filmed within driving distance from the Treasure Valley, and now fans can see what it's like to live like a Dutton by staying at the Yellowstone. Some lucky fans from around the country have been able to stay there recently, and their pictures are amazing. Special thanks to Dr. Peter Kozlowski, Hannah Boon, and Chief Joseph Ranch for allowing me to use these photos.
Filed Under: aurora borealis, dates, idaho, location, Moug, moug and angie, northern lights, Views
Categories: Twin Falls News
Comments
Leave A Comment
Why Many New Businesses Have Opened in Idaho the Last Few Years
Moose Shot and Killed After Charging Man in Idaho Residential Area
10 Silly Meanings Of Idaho Town Names According To The Urban Dictionary
What Would You Do? How to Date in Twin Falls and the Magic Valley
Easy Peak Trail 65 Miles From Twin Falls ID Offers Majestic View
Stunning Photos of the Northern Lights Seen From Central and Southern Idaho
There’s A Pretty Good Chance to See the Northern Lights Tonight in Idaho
New Contest Lets You Fly Idaho To Sweden To Chase Northern Lights
The Unhealthiest Restaurant Order In Idaho